Every year we help lead the Transgender Day of Remembrance Candlelight Memorial.  This is normally an outdoor event held in The Triangle in Bournemouth on the 20th November. 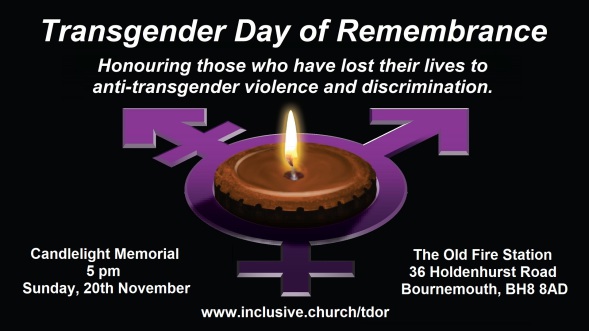 About Transgender Day of Remembrance

Transgender Day of Remembrance (TDOR) was started by transgender advocate Gwendolyn Ann Smith when vigils were held to mourn the death of Rita Hester, a transgender woman who was murdered in Boston in 1998.  That first vigil has become an annual memorial for all the transgender people who have lost their lives to anti-transgender violence and discrimination during the past year.  TDOR is held on the 20th November with vigils around the world.  Rita Hester’s murder, like most anti-transgender murder cases, has yet to be solved.

'Transgender Day of Remembrance seeks to highlight the losses we face due to anti-transgender bigotry and violence. I am no stranger to the need to fight for our rights, and the right to simply exist is first and foremost.  With so many seeking to erase transgender people – sometimes in the most brutal ways possible – it is vitally important that those we lose are remembered, and that we continue to fight for justice.'

Although not every person memorialized self-identified as transgender, each was a victim of violence or discrimination based on bias against transgender people.  TDOR helps to raise awareness and allows us to publicly mourn and honour the lives of those who might otherwise be forgotten.  On this day, we stand together against hate; with a spirit of love and compassion, and then renew our commitment to work for justice.  In this way, we not only honour those we lost, we affirm the lives of the living – in being allies, activists, and advocates as we affirm the truth…that all life is precious.

Below are some pictures of past Transgender Day of Remembrance events that have been held in The Triangle in Bournemouth.